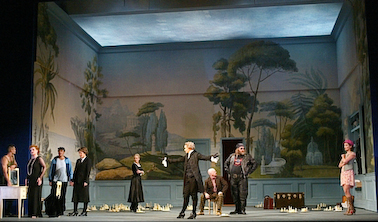 What better way to anticipate the Fourth of July than spending time with Richard Strauss, who fiddled while the Nazis burned Europe? He languished in apparent dotage as the Yanks stormed the beach at Normandy. Suddenly the first oboist of the Philadelphia Orchestra showed up at Strauss’s mountain retreat in Bavaria. Then a uniformed GI, the oboist commissioned a concerto from the snowy-haired, stork-like composer, and a minor masterpiece was born.

Strauss’s arch comic opera Ariadne auf Naxos appeared in 1912, in the delusional twilight that masked Verdun (714,000 casualties), the Munich putsch, and every satanic horror to come.Blissfully unaware, Strauss also had the nutty idea of preceding his operatic confection by a complete performance of Moliere’s play, Le bourgeois gentilhomme, but the premiere, a flop, stretched the audience’s attention span, not to mention their Sitzfleisch, beyond human capacity. What we are left with is caviar, Strauss’s most sophisticated stage work and a bubbling treasure of melody unmatched by anything outside Die Fledermaus.And like Fledermaus, Ariadne dreams of a heaven where the triumph of love is the same as the triumph of humour.

Covent Garden’s current revival does the work justice, which is highest praise, because Ariadne is devilishly tricky to stage.It’s a work of high and low styleuneasily mixed.The director, Christof Loy, literalized this by placing the entire stage on a lift – we see upstairs first, a spare modern room with a few guests loitering, and then it rises out of sight to expose the downstairs where motley performers are prepping for the night’s entertainment.Preening opera stars stare glassy-eyed at a rag-tag bunch of acrobats, but soon turn aghast when it is announced that the evening’s host, a rich somebody, is too bored to watch both acts. He decrees that high and low shall consort on stage at the same time (to be followed by fireworks on the lawn, the only thing he’s really interested in). Comedy ensures.

The trouble with most productions is that not much comedy ensures. The librettist, Hugo von Hoffmansthal, was the sort of aristocratic, ineffably classical poet who would be annihilated in the gunfire of two world wars. (Hoffmansthal himself dropped dead of a heart attack, freakishly, on the same day that his beloved son died.) He possessed no talent for knockabout, and in Ariadne’s second halfthe acrobatic troupe’s caperingcomes off as lame.But not here. Loy had a cunning alternative (which the London critics, true to their base tastes, couldn’t fathom). He makes the comic and serious characters oblivious of each other, occupying the same stage like passing ghosts. In Loy’s updated conception, our acrobats are tourists rubbernecking at Versailles or more probably Euro Disney (including a bearish Hell’s Angel in full leathers and a blonde, flirty slut who could pass for a naughty Goldie Hawn). They intrude on a boudoir decorated by Fragonard – it could be Marie Antoinette’s–and by befuddled glimpses they perhaps witness a classical opera, entitled, like Strauss’s, Ariadne auf Naxos. What follows is not comedy but touching pathos as ordinary folks discover that high art means something personal and real: the same heartbreak and longing for love that strikes us all, in or out of Euro Disney.

The Royal Opera’s singing cast was world class from top to bottom (a situation as rare for this company as it is common for the plushly enriched Met).Goldie Hawn, or rather the superbly relaxed and technically wondrous coloratura,Gillian Keith, stole the show with Zerbinetta’s dizzying seven-minute fireworks aria.But dramatic soprano Deborah Voigt grabbed all the headlines when she was fired from this production in 2004, the excuse being that she was too fat to appear decently in a little black dress. After gastric bypass surgery the dress is no problem anymore, and one sensed that the audience cheered her for that primarily. On vocal grounds Voigt has the gleam and soaring quality that lifts Strauss’s honeyed melodies into orbit, despite some hardness of tone that few sopranos avoid over time.Her Ariadne filled the hall so magnificently that it fluttered feathered hats in the balcony. The amazing thing, however, was that the tenor part of Bacchus, the god who descends upon the isle of Naxos to rescue pining Ariadne, wassung equally well byRobert Dean Smith. Opera queens, I mean opera aficionados, will recognize that Voigt and Smith made a success at the Met this spring in a broadcast of Tristan. They both have voices a size too small for that marathon but are perfectly suited for Ariadne, whose heavy vocal lifting belies the fluff of comedy.

When a writer remembers his warm tears, the reader is generally left cold, but the performance last night did draw tears by the end. Bacchus raised Ariadne to heaven, or rather Strauss’s endless melodies did. Directors are fond of spangling the stage with glitter and strobe lights to create a spectacle here. Loy gave us two dinner guests in a Fragonard room searching for each other blindfolded. It was a conceit for separated lovers but also for a lost culture whose atmosphere we struggle to breathe again.I came out of the alabaster opera house into the raucous streets around Covent Garden and its perpetual merry-go-round, thinking about that lost culture and the amputated veterans who wandered around London as late as the Seventies and Eighties. 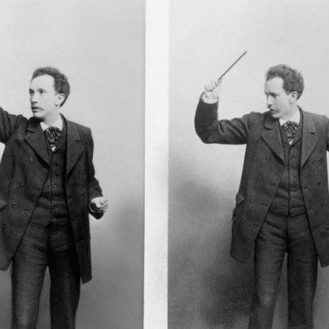 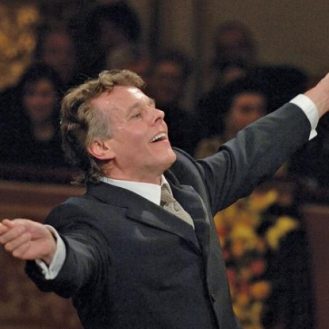