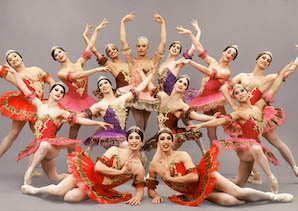 Men in tights, dancing on point, corsets squeezing not-so-tiny waists, savoring their moments as heroes, and yes, heroines—an oxymoron, a cross-dressing incarnation of Robin Hood, a Chelsea nightclub dream-come-true, or simply a fantasy? Would you buy all four.

Les Ballets Trockadero de Monte Carlo, a troupe of burly male dancers more affectionately known as the Trocks, bounded into The Joyce for an evening of hilarity and surprising grace.

For purists without humor for mockery, vacate your seat before the curtain rises, lest you take offense. For the rest of us, let the games begin! Unfolding scenes from Swan Lake, Le Corsaire, La Trovatiara and others, the Trocks perfect that tradition of parody, incisively mocking the bravado, opulence, drama and excess of ballet (specifically in the Russian tradition). Carefully studied postures blend with over-the-top gestures and powerhouse technique to deliver performances that are amusing, but also thought provoking.

While in some scenes there is no doubt that husky, well-muscled men play both the role of hero and damsel, seizing every opportunity to take a balletic jab at the institution of dance, and hamming it up with drag make-up, splitting rump-ruffles and tummy-tucking corsets, other moments leave the illusion much less exposed.

Not unlike Shakespeare, the Trocks have studied the nuance of both male and female gesture, movement and affectation. Mockery is well played, but creating a seamless fantasy is the true test of their mastery. There are several moments where magic is made, and watching two men dance a perfect pas de deux almost feels authentic.

Nowhere is this truer than during Le Corsaire Pas de Deux, danced by Yakataruba Verbosovich (Chase Johnsey) and Jacques d’Aniels (Scott Austin), where the illusion is flawless. Johnsey is one of those rare creatures whose androgyny serves him well as a member of the Trocks. Coupled with his studied grace, poise and dexterity (this is a man who clearly wants to be a reincarnation of Julie Kent), it is a short leap from man to maven.

In the tradition of the Pas de Deux, the lovers both support and compete with one another, but the additional infusion of twice the testosterone makes this battle of the bulge especially titillating, and offers an extra surge of excitement. You haven’t really seen ballet until you see a 6-foot man nail 12 fouettes after a flawless bout of quintuple pirouettes. So while these men are poking fun at the history of dance, they are also desperately longing to be taken seriously within the tradition, and to surpass its benchmarks for success in both feats of performance and technique. So while they smile behind their garish lipstick, and tilt a cocky head in acknowledgment of their cheekiness, might they also be secretly thinking, ‘take that, Wendy, Julie and Ethan?”

Damsels or dukes, swans or swain, these men are neither novelty nor oafs. They are the perfect incarnation of the oxymoron—garish and graceful, irreverent and deeply steeped in tradition, comic and charismatic. They are fairy tale and reality, guised in an ever-changing, often surprising and never dull package. And since they’re in the business of rescuing themselves, there’s not a distressed damsel in sight. What a relief.