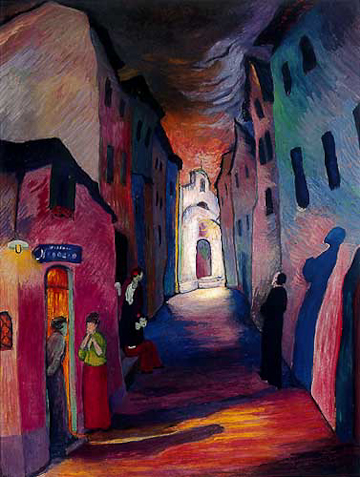 Marianne von Werefkin (1869 – 1938) is one of those rare artists whose words and sketches almost tell us more about her paintings than the paintings themselves. The words are found in her Lettres à un inconnu written while travelling through Brittany, Paris, and the Provence with artist/companion Alexej von Jawlensky. The sketches, initially outlined in ink and later colored in with pastel or tempera, were her way of satiating an irrepressible “thirst for the abstract” which she subsequently expressed in her full-scale works.

This collection of fifty temperas and a dozen drawings, together with the above-mentioned sketches and portions of her diary, bring to light the charisma and intelligence that earned her such appellations as the “Russian Rembrandt” and “Amazon of the Avant-garde”. Oppressed by the limitations, tedium, and mediocrity of the external world, Werefkin relied a unique, figurative style to illustrate her love for the “things that are not”. The artist’s calling, she claimed, is to counter the reality of perceived things with the “unreal” things of the soul.

The sine qua non of her enterprise was color, a privileged vehicle for conveying the internal life of thinking and feeling. The human spirit extends into the world and charges it with emotion; it is the painter’s task, she believed, to record this dynamic movement by arranging colors in a way that fills the picture with psychological symbolism. The deep greens and fiery yellows of “Summer Performance” (1910) and “Skaters” (1911) compellingly illustrate the results of her venture.

Werefkin lamented that artists were more likely than anyone to forget the power of color to subsume form and directly influence our perception of the size and grandeur of things. The more monochromatic a composition, the more color takes the place of form. If artists would only place color at the center of their attention, a preoccupation with the “real” would quickly fade away. They would come to a deeper appreciation of how the juxtaposition of color amounts to a contrast of values that voraciously feed upon or gently meld into one another. Werefkin pointed to Gauguin’s Tahiti pictures as a prime example of this, arguing that the polychromatic impressions he sought to represent obliged him to search for analogous forms in which to represent them. She begged artists to drop the endless discussions about disegno which only distracted them from exploiting the possibilities open to their genius – without, however, disrespecting the lines, colors, and shapes that make up the “grammar” of art.

Ever in pursuit of the spiritualist and theosophic ideals which began to take root in her even as early as the 1880s while still under the tutelage of Ilya Repin, Werefkin paved the way toward a new aesthetic more commonly recognized in the abstractionism of Kandinsky and Klee. The personal suffering Werefkin recounts in Lettres à un inconnu is never detached from an “aesthetic suffering”; she believed that agony and pain constitute true knowledge, and only by passing through them could one eschew a slavish reproduction of the visible and aspire to make the invisible visible. Her oft repeated definition of art was “a feeling that takes form”. 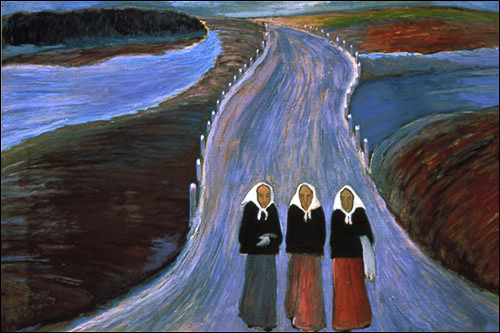 At times the feeling is simple and acute, giving birth to a focused form as evident in “Country Road” (1907), “The Red Tree” (1910), and “The Rag Man” (1917). At other times it is more complex and diffuse, as in “Ave Maria” (1927). Here, unlike in many of her paintings, the human face contributes to the overlapping emotions presented through rich, contrasting tones and ominous shadows. On the right we see a cleric paused to recite his Marian devotion, facing a church gently bathed in white light. Across the street in a darkened doorway are two women, apparently of ill-repute, one seated and one standing, eyes fixed on the priest in a surly stare. In the foreground are two older women chatting in the doorway of an intensely lit negozio. For as close as the three groups of characters are to one other, their emotional spheres are worlds apart. The priest stands in detached recollection, his curved shadow suggesting a momentary visit to another realm. The young women are perturbed by the sight, though ultimately the robed figure is nothing more than a passing curiosity. The women in the shop door may well be gossiping about any of the other characters, but in the end their chatter is a harmless way to wile away the time. Despite the isolation of these three distinct groups, each exerts a powerful emotional field upon the others, all of which reappear symbolically in the interspersion of colors above. The ambiguous gray above the priest both filters the light striking the façade and grapples with the neighboring fields of red and purple. One may disagree about the appropriateness of the emotions expressed, but the colors used to express them are as incontrovertible as the notes of a Beethoven symphony.

Werefkin uses greater perspective and tone variation in this picture than in others. Like Edvard Munch, she tends to steep her paintings in a weightiness and instability that marginalize the human figure as we see in “Sunday in Springtime” (1907), “Woman with a Lantern” (1910), and “After the Storm” (1932). Two notable exceptions are “Autumn School” (1907) and “Whirlpool of Love” (c. 1917), both of which depend on the human figure to create a sweeping movement within a shallow picture frame. In the latter, Werefkin swirls and speckles a host of unnatural colors across the surface to evoke powerful feelings of romance and desire. Quietly resting in the center is a tiny angelic figure which she later identified as herself.

Most of these paintings are on loan from the Marianne von Werefkin Foundation or from private collections. Unfortunately they do not include some highly original scenes of the life of Saint Francis which Werefkin executed after a visit to Assisi. Also absent are more abstract works inspired by her “solitary meditations” in Ascona where she spent the last two decades of her life. Nonetheless, these pieces demonstrate her enduring fascination with theory and its impact on practice, a conviction that inspired her pivotal contributions to the Neue Künstlervereingung in Munich and the Großer Bär in Ascona. Perhaps most impressive was the resolute will and physical toughness that allowed her to regain use of her right hand after a hunting accident in 1888. Had she not, one wonders what would have become of the avant-garde.