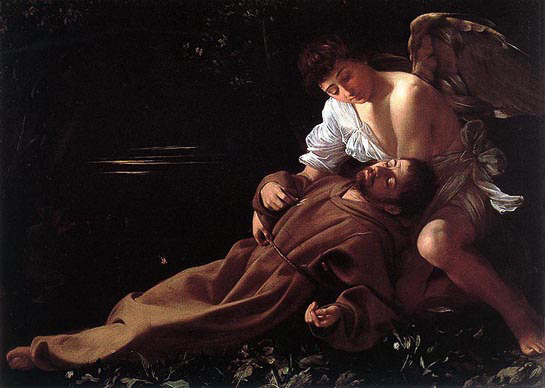 The shows in Italy honoring the four-hundredth anniversary of Caravaggio’s death have been so popular that authorities at the Palazzo Pitti in Florence have announced they are extending “Caravaggio e Caravaggeschi” at the Galleria Palatina until January 9th. Pilgrims can also take advantage of “Caravaggio e altri pittori del XVII secolo” at Castel Sismondo in Rimini until March 28th.

Among the fifteen paintings on loan by the Wadsworth Atheneum in Hartford for the show in Rimini is Saint Francis of Assisi in Ecstasy (1594 circa), one of Caravaggio’s first religious works. Not only does it showcase the artist’s earliest pictographic and metaphorical experiments with light, but also his unconventional presentation of standard religious themes. In this case, the seraph who imparted the stigmata to Francis on Mount Alverno is conspicuously absent. Caravaggio puts in its place a two-winged angel gently cradling the pierced friar in its arms. The seraph had been canonically present ever since Giotto’s first stunning renditions of the episode three centuries earlier. By omitting it, Caravaggio has poignantly evoked the interior dimension of the saint’s spiritual death and rebirth. With fingers lightly entwined in Francis’s cincture, the angel gently rotates the saint’s body towards us to give us a better view of the mysterious wound in his side, inviting us to follow him in uniting our sufferings to Christ’s. The Rimini show also includes rare paintings by Gentileschi, Strozzi, Zurbarán, and Caravaggio’s great admirer, Ribera.

By comparing Caravaggio with his contemporaries and successors, both the Florentine and Rimini expositions echo a refrain emerging during this anniversary year: Michelangelo Merisi was as deeply concerned with reality as with drama. We now realize that the theatrical aspect of his work has been exaggerated. His pictures are filled with so much action that it would hardly have been possible for studio models to hold these positions for any length of time. While Caravaggio assiduously honed his still-life technique, imitating whatever ordinary household objects he could get his hands on, his depiction of human movement shows an uneasiness — a lack of kinesthetic coordination. To have perfected this ability, he would have had to spend long hours learning how to adhere to the same conventional standards he so vehemently despised. As a result, his figures appear still even at the moment of the most violent of actions or re-actions (see Boy Bitten by a Lizard).

A comparison of the two versions of the Conversion of Saint Paul made for the Cerasi chapel in Santa Maria del Popolo suggests that Caravaggio was aware of this weakness. The first version, now kept in the Odescalchi home, is physical, tumultuous, and closely patterned after the event as recounted in the Acts of the Apostles. The second is spiritual, serene, and highly original in its presentation of the subject. We do not exactly know the circumstances that led to the substitution of the first with the second, but it seems that the death of Monsignor Tiberio Cerasi, who commissioned the first version along with a Crucifixion of Saint Peter, led to insufferable delays in Caravaggio receiving payment for the work, perhaps because the surviving members of the Cerasi family were never pleased with the pictures to begin with. Hence Caravaggio may have decided to sell both paintings to Cardinal Giacomo Sanneio and produce another set. 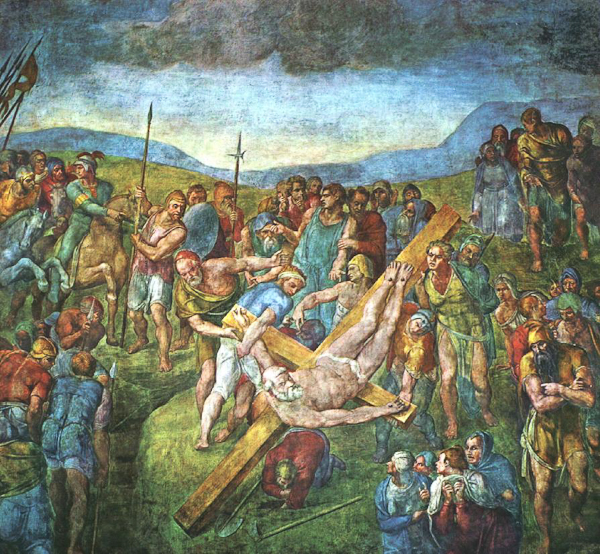 The mood of the second version is dominated by the enormous horse, viewed from the rear and unaware of the sudden epiphany experienced by its fallen rider, practically replacing him as the main protagonist. Diego Velázquez was so struck by this invention that he decided to incorporate it in Las Lanzas. For his part, Caravaggio was paying homage to Michelangelo as is evident in the Crucifixion of Saint Peter. Michelangelo’s recently restored frescos of these two scenes in the Vatican’s Pauline Chapel depict, on the one side, the Prince of the Apostles gazing, almost furiously, towards the entrance of the chapel where the pope still enters today, reminding him of the gravity of his duty to follow the fisherman to death if necessary. Such admonition was particularly urgent during the post-Tridentine reforms carried out by the Farnese Pope Paul III who commissioned these frescoes from Michelangelo. The pope’s own radical conversion after being elected to the See of Peter reflected the cleansing required of the church at large — a cleansing Michelangelo apparently interiorized deeply. Though not yet ordained a priest, Cardinal Farnese had led a worldly life prior to his election, having fathered children with a mistress whom he had to relinquish before being crowned pope. On the other side of the chapel, Michelangelo paints Paul—left arm raised to shield his eyes from the blazing light—as advanced in years even though, according to scripture, he was young on the road to Damascus. Thus the Pauline Chapel was clearly intended to remind Pope Paul (and Michelangelo himself) that it was never too late to change one’s life and that conversion is a never ending task. 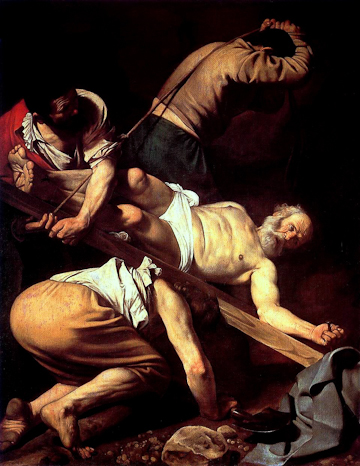 In Caravaggio’s versions of Peter and Paul at Santa Maria del Popolo, there is need neither for the stark admonition in Peter’s gaze nor for Paul’s advanced age. Peter is now turned towards the average faithful, reminding them that they are just as unworthy to bear the name Christian as he was. On the other side, Paul no longer raises one arm but two in the traditional orans position, signalling the universality of the call to prayer. From an artistic point of view, the face of the suffering Peter and the arms of the transfixed Paul show that Caravaggio was more than able to compensate for his subpar representation of movement with an unsurpassed ability to disclose the psychological aspects of any situation, however common or rare. His saints are undistinguished folk blessed with extraordinary experiences of grace in the most ordinary of places.

Perhaps the greatest testimony to Caravaggio’s genius is that the stream of protests against his seemingly indignant portrayal of holy men and women was drowned out by a flood of new commissions. For as controversial as his first pictures in the Cerasi chapel must have been (the Crucifixion of Saint Peter has been lost), Merisi had the gall to make them even more so the second time. His unconventionalism glowers at us all the more when we compare his two pictures to the third canvas in the chapel, the Assumption of the Virgin Mary by Annibale Carracci. Within the small space of the Cerasi Chapel we have a snapshot of the entire history of Western art: Michelangelo versus Raphael, realism versus idealism, the “divine” versus the “human”, Velázquez, Rembrandt, and Goya, versus Poussin, Reni, and Canova.

If not for Michelangelo Merisi detto Caravaggio, we would have little reason to appreciate the revolution launched by the “other” Michelangelo from Florence. 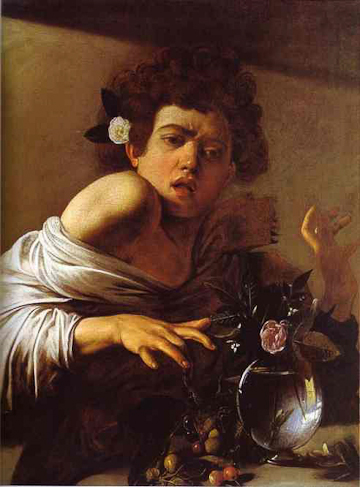 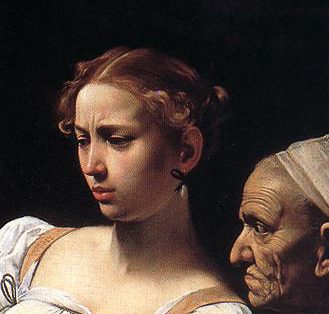 Caravaggio: More than a “Moment” (Review of The Moment of Caravaggio by Michael Fried)