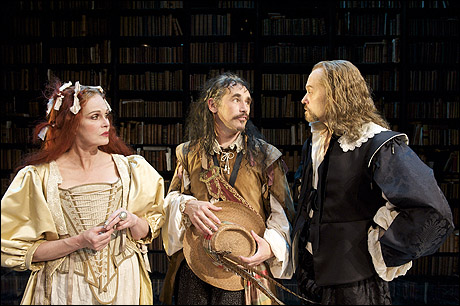 The muse unleashed. The wildest frolic in London is being had by Mark Rylance the first moment he wanders onstage as Valere, a street clown in 17th-century France. In his hand he clutches a glass of red wine and two pieces of green melon. A broken pheasant plume in his hat trails behind. Within thirty seconds he has burped, farted, spit, dribbled melon seeds on his chin, and retired to a commode, after which he wipes his bum with loose pages from a rival writer’s manuscript. For Valere is, unbelievably, a poet and playwright brought to farcical life as a bulging-eyed creature out of Hogarth – or as Rylance plays him, an entire menagerie of Hogarthian sots and loons. He commences on a rapid-fire soliloquy in rhyming couplets that lasts, without taking a breath, for twenty-five minutes.

The audience gasps, repelled yet forced to laugh, and since Rylance won’t relent – he applies the same will power to this doggerel fool that Olivier applied to Lear – there is no choice but to surrender. In the course of the evening Valere will spew garlic breath, play the castanets, recite the Pentateuch by heart (he collapses after “In the beginning”), murder scraps of Latin that he attributes to Cicero, climb the walls, grovel on the floor, and name a female character Esmerolta because she comes from Upper Volta. This is comedy by manic exhaustion, and it could barely be duplicated unless you trapped yourself in a small room with several macaque monkeys.

Beyond Rylance’s brilliant tour de force there are things to say. Freud contended that writing was delayed revenge against the world. If so, then New York playwright David Hirson has exacted ultimate revenge with his quirky verse comedy, La Bête. It opened briefly on Broadway in 1991 to scathing reviews, only to travel to London the following season and win the Olivier Award for best new comedy. Critics still aren’t sure which judgment is fair. The play began as a kind of verbal prank in Hirson’s mind when he attended Oxford in the Eighties. The plot pits high and low art against each other. In this case Valere wants to undercut a serious playwright who is a stand-in for Molière (his name is scrambled to give us Elomire, played by David Hyde Pierce exactly as he played Niles, the prissily precise younger brother on Frasier). Elomire is forced by his aristocratic patroness, the Princess Conti (made regally capricious by Joanna Lumley), to accept the absurd poseur into his acting troupe – shades of Strauss’s opera, Ariadne auf Naxos – causing consternation and comic anguish.

One can imagine this as a skit put on by somewhat precious undergrads in the full flower of their confidence, mocking boorish popular art in pseudo-Johnsonian couplets. That’s what the play is now, extended to ninety minutes. But in its current revival at the Comedy Theater, all the iffy parts have been smoothed over. Archness and preciosity only add to the fun. Changes have been made so that Elomire’s climactic rant against vulgarity feels like noble self-sacrifice (I’m giving away very little to disclose that the Princess chooses Valere over his high-minded rival in the end), while Rylance adds enough pathos to the fool that we feel more than ridicule. The whole contrivance is a bubble always about to burst, but it quivers intact to the final scene of Elomire wandering off into the foggy distance. Valere gets the laughs; he gets posterity.

As for ideas, Elomire warns that there is a beast lurking inside the heart of a fool (hence the play’s title), a beast that wants to make a fool of art. It sounded better in verse, which can beguile the ear while lulling reason. Hirson’s versifying will be familiar to any bright English major who thought that it would be easy to write like Pope. It isn’t. English hasn’t had a comic verse masterpiece since Byron’s Don Juan (a work that offers strong evidence to the camp that says he was as much Augustan as Romantic). To his credit, Hirson doesn’t ape Gilbert and Sullivan but fashions his own original pastiche, if that concept flies.

You don’t come away from La Bête remembering the words, anyway. What sticks in the mind is Rylance’s sparkling eyes and broad self-satisfied smile as Valere ruminates on his own genius, blissfully unaware that his head is as empty as the green melon dangling from his fingers.