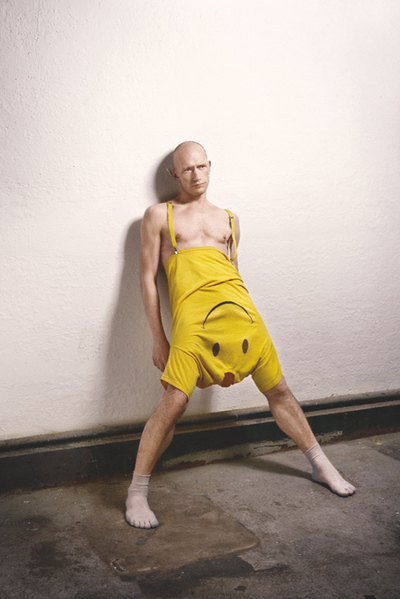 All of the wall dividers in the Whitney’s fourth floor galleries are down creating an enormous long, rectangular dance platform. The iconic trapezoid window jutting out over Madison Avenue has been covered. Yet, my eyes, perhaps accustomed to seeing painting and sculpture in this space, seem to look for comparisons with static art forms in the seven-part abstract dance sequence by British choreographer Michael Clark, entitled “Who’s Zoo,” to the pop-punk recorded music of Javis Cocker. This is dance more like animated sculpture, creating forms and shapes to be viewed as curious objects, not fluid art in motion.

As the lights dim, a single beam of light stretches across a back wall the length of the space.  Two male dancers appear in flame-colored body suits created by Stevie Stewart, moving swiftly in unison. They are strong, breath-taking, and powerful. Like Clark, trained at the Royal Ballet School in London and, briefly, with Merce Cunningham in New York, the dancers have classical technique with Cunningham’s signature torque and changes of direction. (One of the dancers is, in fact, a former member of Cunningham’s company.)   Three more pairs of dancers appear, six in all. The pairs form clusters – moving and stopping and moving – in a staccato rhythm like puppets. And they dance alone in slow, contorted sequences with one foot or one arm firmly planted on the ground. Suddenly, straight arms attached to rigid bodies move like the pendulum of a clock. As the music changes from dance beat to street sounds, pong and pulses, or a long exhalation like air being released from a tire, the disciplined dancers move in highly choreographed, but emotionless patterns, their faces never changing, expressionless. What does all this mean? What is Clark trying to say? It’s not clear. The beam of light on the back wall, expands and contracts. One dance sequence ends; another, after a pause, begins. It is formal yet surprising, profane and sane at the same time.

For me, the most interesting moment came when clusters of 16 people dressed in black – young and old, round and tall, you and me, and clearly not professional dancers – appeared and moved in a box-shape across the space in a simple sequence of repetitive, choreographed steps. Black pillars, I thought, a temple.  And dancers in their flame-colored red costumes moved among them and through them. Two more “boxes” of people emerged, 48 people in all, filling the dance space. Suddenly, I felt as if I were looking at an enormous log with dying embers, the flame dancers lost in the maze of blackness.

Clark, himself, now close to 50, appeared twice in the 40-minute dance. Both times he was wearing a dark sweat suit with the hood pulled over his head and black socks. He seemed out of place in this strange outfit, his role unclear. For the last two movements the dancers changed into tight black and silver body suits and used a three-legged mirrored stool as a prop. As dancers moved with the stool, in the stool itself, tilting pelvises suggestively, Clark swung the stool up and down and around. “I have seen the future,” the lyrics of the rock music blared, “and it is not nice…” People as objects moving like pistons in an engine, emotionless and disconnected. Is this the message, then?

Clark, who launched his own company in 1982 rather than accept a prestigious position with the Royal Ballet, has a long reputation as an iconoclast and provocateur and is clearly still jarring sensibilities in this latest appearance, a follow-up to a similar residency at the Tate Modern in London last year. 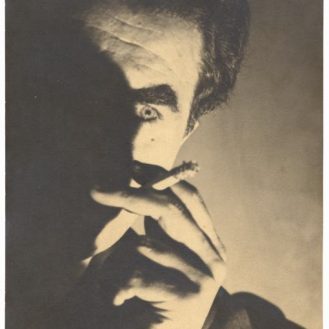