Confidence and (The Speech) and Jimmy Carter’s America

Confidence and (The Speech)
By Susan Lambert Hatem
Directed by Hannah Ryan
Movement Director: Karla Garcia
Presented through December 7 by Charlotte’s Off Broadway at the Lion at Theatre Row 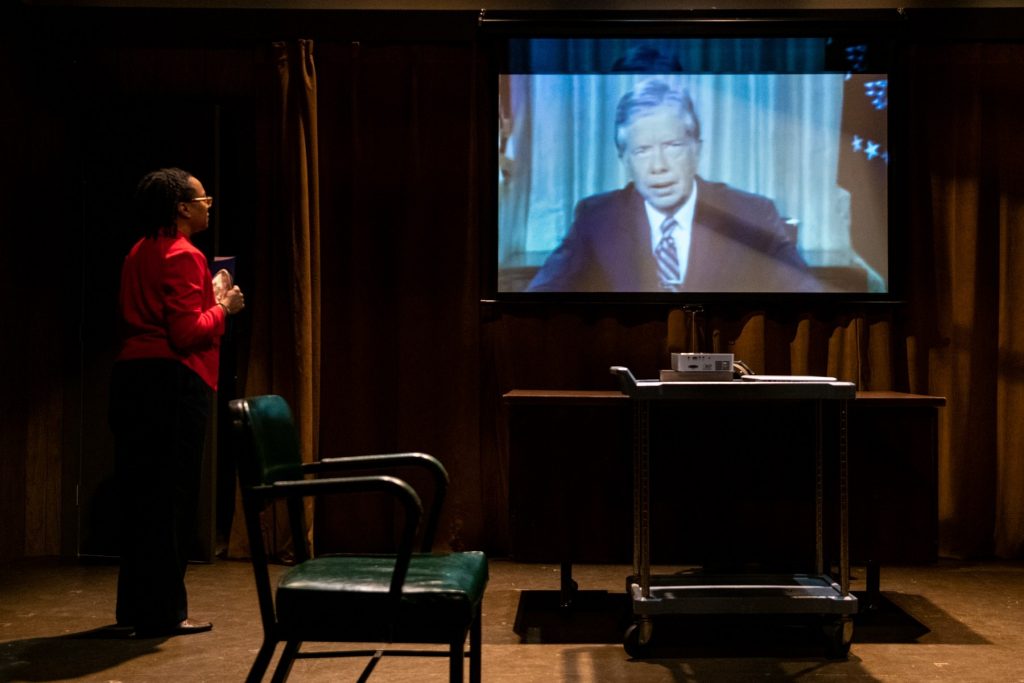 A Scene from CONFIDENCE and (The Speech), Sarah Dacey Charles and April Armstrong, Photo Russ Rowland.

The thing about Confidence (and The Speech)—playing now at the Lion on Theater Row by way of Charlotte’s Off-Broadway, a North Carolina production group that dramatizes “authentic female experiences” as well as questions of “social injustice and inequality”—is that while the play hews seamlessly close to the company’s plainly outspoken mission, it does so without ever losing its cheerful sense of theatricality. That is to say, Confidence, by Susan Lambert Hatem, is, by turns, boisterous, feverish, audacious, and utterly playful. It is nifty and important at the same time, which is to say it’s the absolute best kind of theater.

The play is set in the present day, but not for long. Professor and historian Cynthia Cooper (a nicely tempered April Armstrong) is teaching her university class when a young man named Jonathon straggles behind to pummel her with questions about President Jimmy Carter’s storied Crisis and Confidence speech. Cooper was an intern at the Camp David summit that resulted in the speech, which Carter delivered on July 15, 1979. The president originally intended to address the country’s oil-consumption woes but instead wound up offering a candid if somewhat lugubrious assessment of the “heart and soul and spirit of our national will,” which he felt was mortally at risk in “nearly invisible” ways. Cooper proposes to enact the story of the summit but only on certain conditions: she gets to play Carter, and Jonathon must play her decades-removed, smart but-less-than-assured younger self, the person she was at the summit. “It won’t be that hard,” Cooper tells an anxious Jonathon. “They didn’t let us speak too much in those days.” 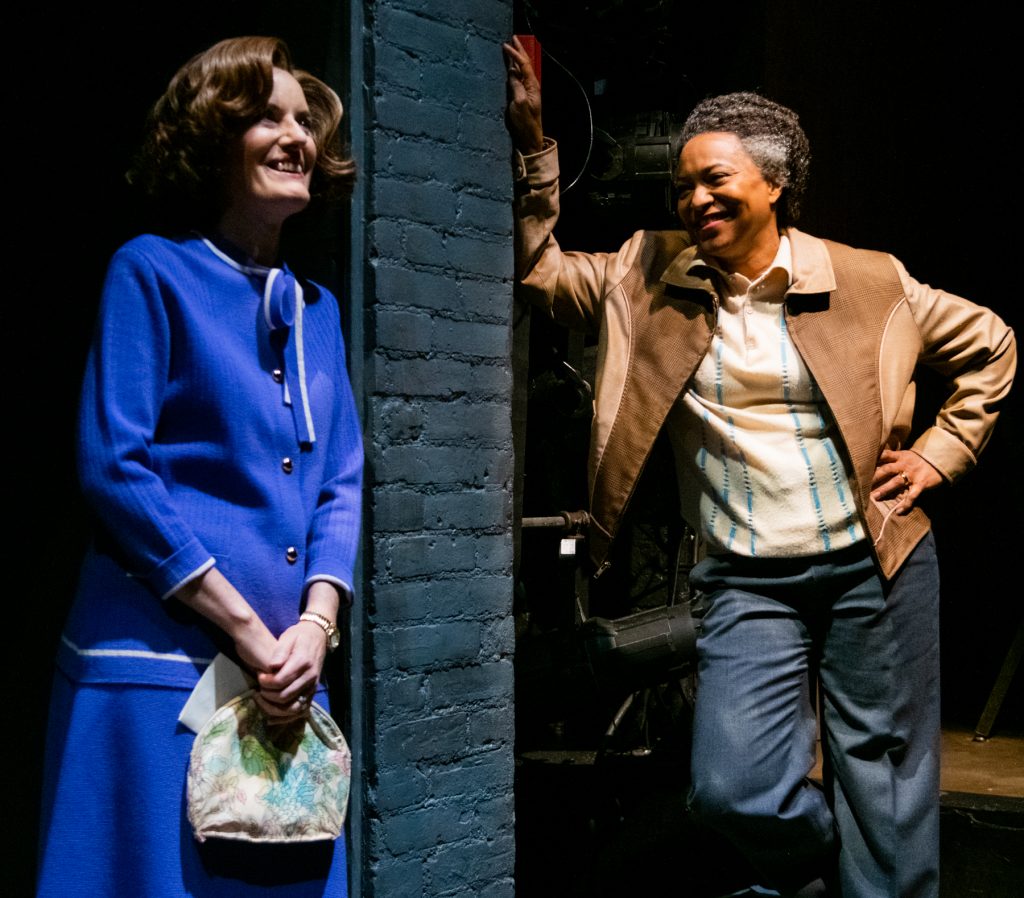 A Scene from CONFIDENCE and (The Speech), Sarah Dacey Charles and April Armstrong. Photo Russ Rowland.

And thus, the stage is set—or reset—to usher us back to a time when we were, as Cooper remarks, “as usual, a country in crisis.” Actors who just moments ago played students in Cooper’s class now reappear as President Carter’s cabinet: Ham Jordan, Pat Caddell, Jody Powell, and Fritz Mondale. Jonathon is stripped of his casual wear and outfitted in skirt and heels; Professor Cooper gets a tie and business jacket, her braided hair placed under a coiffed, greying wig. And the past and present crises Cooper refers to? Well, in place of melting ice caps and an executive office becoming unmoored daily by aberrant, astonishing power-grabs, late-70’s America featured a horrifying, nuclear meltdown at Three-Mile Island, a space station (Skylab) that had fallen off the grid and was now projected to land (somewhere) over the Indian ocean, “gas lines, truckers striking and riots in the street,” and, yes, polar ice caps for which a plan needed to be in place to save them within 4-9 years.

But the winning reversal in Confidence, a play that in some ways is all about reversals (Cooper and Jonathon’s identity changes; the upended energy-policy speech), is that while Lambert Hatem’s narrative is wholly concerned with the presentation of a believable, if diverting, historical record of the summit—“It’s my story. I’ll tell it any way I want, “ Cooper replies when Jonathon asks her how she could have been present for some of the events she describes—the play’s actual mission is to take everything we’ve been taught to believe in, everything we take for granted, and stand it on its ear. Though Cooper’s transformation into President Carter can be seen as a gender reversal, her pairing with wife Rosalynn (an appealing Sarah Dacey Charles), creates a solid, authentic power couple for whom matters of gender seem at best irrelevant. But in this play, the people displaying power and authority aren’t always located in conventional spaces but instead can be found among the typically marginalized and sidelined. If this seems like a massively appealing, if idealized daydream, then you may want to spend time in this play’s company.

I enjoyed every minute, even if I found myself questioning the final reversal at the very end. I wondered if Confidence wanted to have it both ways: its formidable achievement—the establishing of a world 40 years old that stunningly resembles our own—is somewhat undercut by the play’s sudden revelation of a current-day, idealized political accomplishment that has dramatic implications for Professor Cooper.

Director Hannah Ryan makes sure that the production is winningly paced and that the parade of what could have been political caricatures are instead recognizable, three-dimensional people. The cast is first-rate (Zach Fifer’s Jonathon is a marvel of small, self-conscious, thoroughly human attributes), and the costumes (Vanessa Leuck) and wig design (Bobbie Zlotnick) manage to be dead-on, historically accurate while always taking into context the intricate social mores the play firmly means to tamper with. After all, has there ever been a time when who we are, and who we believe ourselves to be, as a nation, needed more tampering with than right now? Confidence (and The Speech) performs no less than a public service in accomplishing that feat. 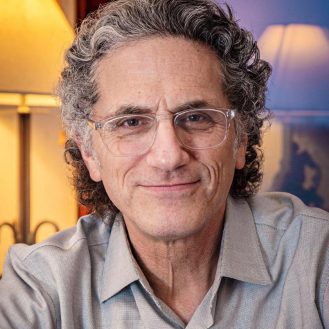 Sid Ross is a playwright, critic, actor, and educator. He wrote and performed the solo piece Becoming OCD, which was selected for the 2016 New York International Fringe Festival. His plays include A Feeling of Family (Lanyard Theater, Bath, ME), Kangaroo Days (Grove Street Theater, New York, NY), and White Crimes (MCC Theater). Acting credits include Abdication! (Theater for the New City/Dream Up Festival) and Lucky in Love (78th Street Theater Lab, New York, NY). Film/Video: Seasons Greetings (Overall Specialists Films, LLC/Dir.: Whit Conway), Lo Ciento (Dir.: Brett Baron-Marianetti), and The Other Line (Team Zebra Squad Alpha/Dir.: Will Roane). Sid is a theater critic for Splash Magazines and New York Arts, and is a member of The Writers and Actors Group (NYC). He lives in Long Island City with his wife, artist Lori Sanford-Ross, and their daughter Rachel. www.sidross.com