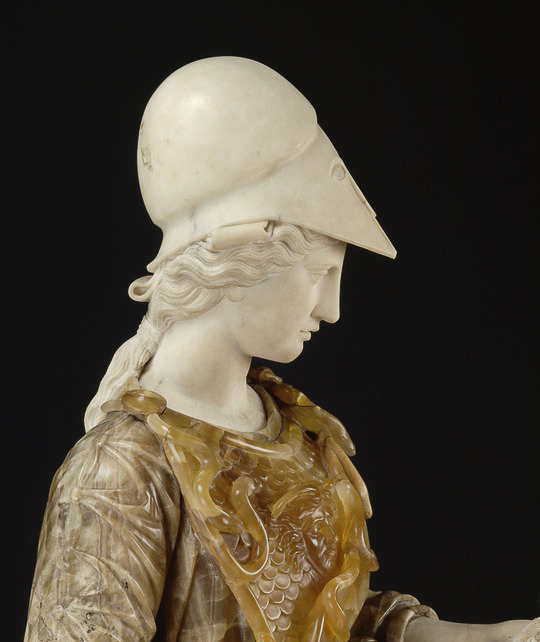 Draped in rich onyx and agate, the Minerva d’Orsay perhaps best represents the hybrid aesthetic the Fondazione Roma wants to showcase in this its first exhibition in a newly dedicated space at the Palazzo Sciarra. Originally dating from the Hadrianic Era (117-138 C.E.), the Minerva d’Orsay was meticulously reconstructed according to the refined sensibilities of English and French tourists in Rome. She exemplifies the unique blend of purity and sumptuousness that was the standard of eighteenth-century aristocratic taste. The developing science of archeology helped saturate a market of ruins-turned-domestic-treasures that artisans in turn viewed as much an opportunity for creativity as restoration. A large vase of Giambattista Piranesi (1720-1778) composed of fragments dating from various periods is a fine example of the pastiche approach to restoration. It is not entirely clear if Piranesi passed these items off as originals or reproductions, but they brought in a pretty penny just the same.

The real lesson of this exhibit is that, in the end, it matters little to what extent these are products of restoration or originality. They are rooted in a strange mixture of Cicero and Livy read at school and pictures admired on the walls of relatives’ homes in Paris and London. Several vedute and capricci by Giovanni Paolo Panini (1691-1765), Charles-Louis Clérisseau (1721-1820), and Jean-Baptiste Lallemand (1716-1803) showing apostles and sibyls preaching among the ruins hark back to this idyllic archaism. Goethe suggested that the dilapidated wonders of the Eternal City were all the more “venerable” since “even in their ruined state, one can still perceive their ancient symmetry.”

Similar to the Minerva d’Orsay is the Capitoline Flora (c. 125 C.E.), unearthed at Hadrian’s Villa in 1744 and re-cloaked in eighteenth-century robes. Also on view is the Herm of Pericles discovered at Tivoli in 1799 and immediately entrusted to the Pius-Clementine Museum at the Vatican, where it inspired Vincenzo Monti to pen verses comparing the reign of Pope Pius VI with the Golden Age of Pericles.

Papal patronage was in fact a leading factor in the eighteenth-century classical revival. Benedict XIV in particular, after opening the Capitoline Museum, wanted to fill it with as much ancient art as possible. The museum eventually took on a didactic role after the Scuola del nudo was founded in the nearby Palazzo dei Conservatori in 1754. The Capitoline Eros gives us a taste of the skills pupils hoped to acquire there. 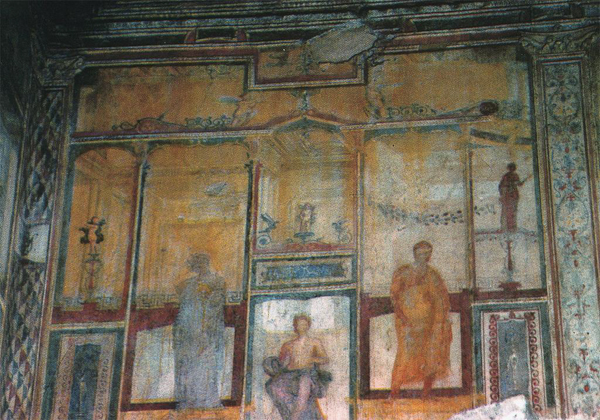 Ecclesiastical support of the classical revival is most conspicuous in a short film by Stefano Borghini and Raffaele Carlani which is perhaps the highlight of the mostra. It presents a virtual reconstruction of the sixteen rooms of the Domus Aurea discovered during the first systematic excavations carried out by Pope Clement XIII. Parts of the Domus — known as Nero’s grotte — were known prior to Clement’s initiative and were the storehouse of precious mosaics and stuccos copied incessantly by Raphael, Pinturicchio, and Domenico Ghirlandaio. In the late seventeenth century, Pietro Sante Bartoli uncovered other rooms of the Neronian complex and published a series of drawings based on these decorative motifs. It was up to Clement, however, to unveil the full luxury of Nero’s Domus between 1758 and 1769, entrusting the direction of the project to Scottish architect Charles Cameron. Thanks to an album of sixty etchings published by the antiquarian Mirri in 1774, together with drawings and watercolor engravings by other various artists, Borghini and Carlani have utilized modern technology to recreate a visit to the Domus in the seventeenth century. In the second half of the film, they flood the halls with bright light streaming through the enormous open air windows, allowing us to marvel at the frescoes, stucchi, and mosaics in their original splendor.

Winckelmann famously remarked that “the only way to become great and, if possible, inimitable, is to imitate the ancients.” Younger artists are beginning to realize the truth of this adage. As they do, they also recognize an indissoluble marriage between the figurative and literary arts in ancient Greece and Rome that is equally as important as politics for understanding the glue that held these civilizations together. The insatiable appetite for Greek poetry and drama in Rome was the lifeline of a massive civic initiative to adorn the urbs with sculpture, mosaic, and paint. Grasping the intrinsic mutuality of literature and the arts in Greece and Rome was the insight that made both the Renaissance and Neo-classical revival possible. Although this exhibit only alludes to this interdependence, the allusion is strong enough to provoke a reflection on how much the relationship is inevitable and how much it is deliberate, and what a culture has to gain by accepting its inevitability and promoting its deliberation.